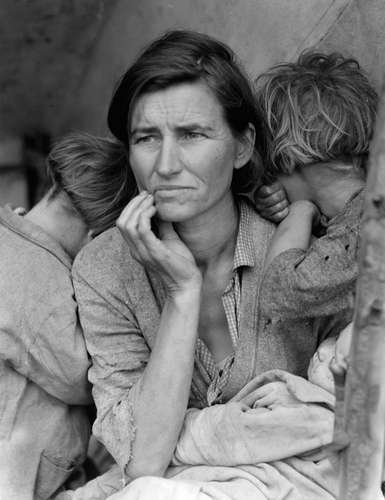 Dorothea Lange and the Guggenheim Fellowship

Dorothea Lange is the photographer whose portraits of displaced farmers during the Great Depression are one of the greatest influences of documentary photography today.

During this terrible time, Lange photographed the unemployed men and women wandering the country and her photos frequently featured captions which used the would-be-workers’ words.

Her first exhibition in 1934 established her reputation as a skilled documentarian and in 1940 she became the first woman to receive the Guggenheim Fellowship.

Born in Hoboken, New Jersey, Lange was born Dorothea Nutzhorn and contracted polio at seven-years-old, leaving her with a noticeably weaker right leg and foot. She ended up appreciating the illness later on in life though, saying that it guided, instructed, helped, and humiliated her.

Her parents went through a bitter divorce when Lange was a teenager and she ended up blaming the parting on her father, dropping his name in favour of her mother’s. Although she attended the NY Training School for Teachers in 1913, she decided to pursue photography instead after working for a while in a studio in New York City instead. She went on to study it at Columbia University and cut her teeth apprenticing for big names like Arnold Genthe and Clarence Hudson White.

Luck played as big a role in Lange’s life as it does in smartphone gaming sites and other games of chance we all indulge in, however, and hers took her far away from her hometown. In 1918 she was ensconced in San Francisco, married with two children and running a successful portrait studio.

Lange first got a taste for documentary travelling around the American Southwest with her husband, the painter Maynard Dixon, photographing Native Americans. As the Great Depression started making its presence known she started training her eye on what she was seeing more of around her, labour strikes and breadlines.

In the early 1930s, Lange met Paul Taylor, and eventually, both left their spouses and started travelling extensively together, documenting images of the rural hardship the country was encountering for the Farm Security Administration. Taylor wrote reports and Lange photographed the men and women they met and her iconic image, Migrant Mother, was captured in this period.

Taylor would go on to note that Lange’s ability to access the inner worlds of these struggling Americans was thanks to a combination of patience and very careful consideration of whoever she photographed. He described her method of work as consisting of going up to them and looking around her, and, when she spotted something worth documenting, she’d take out her camera and inspect it. If she saw any signs of people becoming uncomfortable, she’d stop and wait until they were more used to her and able to relax and let her work.

In 1941 she was awarded the Guggenheim Fellowship for excellence in photography, but she gave it up after the bombing of Pearl Harbour. This was to take up an assignment from the War Relocation Authority and saw her recording the forced evacuation of Japanese Americans to internment camps.

Famous Photographs That Aren’t What They Seem